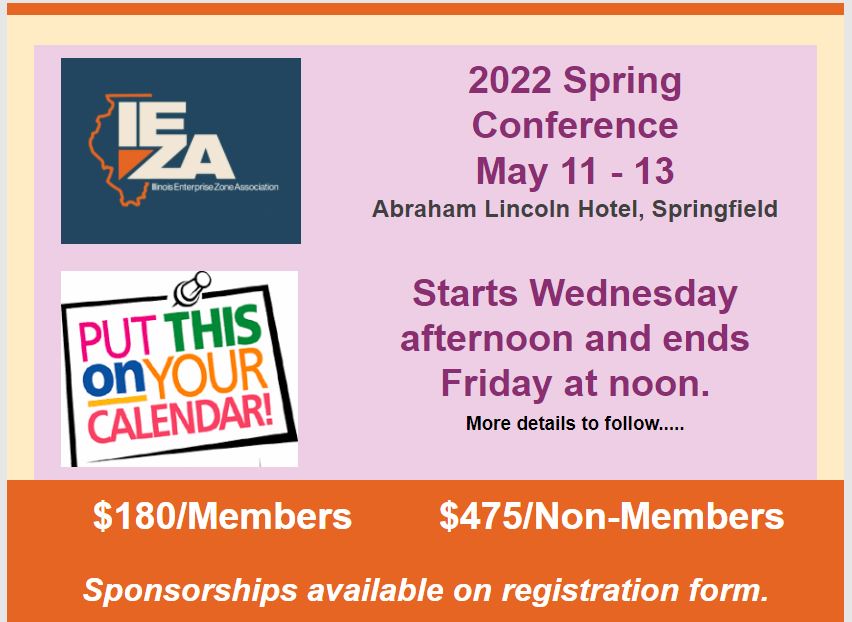 Book your room by clicking here.

Click here to register and pay your 2022 Memberships Due April 1st!

The IEZA board has drafted it goals and objectives for 2006.

GOAL I: Continue to improve communications and record keeping with all individuals, governments, organizations and businesses involved in the Illinois Enterprise Zone Program.

GOAL II: Continue to broaden awareness of the Illinois Enterprise Zone Program through cooperative efforts with other Economic Development organizations.

Recently a question was raised concerning whether or not County Public Safety Sales Tax is exempt under EZ Building Materials Sales Tax Exemption.

Officials from the Illinois Department of Revenue have confirmed that County Public Safety Sales Tax is automatically exempt.

Contractors and other entities participating in a real estate construction, rehabilitation, or renovation project in an Enterprise Zone or a River Edge Redevelopment Zone – or for a state-certified High Impact Business – may purchase building materials for the project exempt from sales tax.

Beginning July 1, 2013, the building materials exemption will be available only to those contractors or other entities with a certificate issued by the Illinois Department of Revenue.

This bulletin provides a brief description of the requirements. For complete information about what you need, visit their website at tax.illinois.gov and click on the “Business Incentives Reporting and Building Materials Exemption Certification” link.

Enterprise Zone and River Edge Redevelopment Zone Administrators are now required to annually collect and compile information regarding job creation, job retention and capital investment and submit to the Department of Revenue. Although businesses have been granted an extension until May 20, 2013 to file Enterprise Zone reports pursuant to Public Act 97-905, Zone Administrators aren’t as lucky. The deadline to complete this online reporting is March 30, 2013.

Within the last week, the Department of Revenue issued letters to Zone Administrators of record with a PIN number and your Enterprise Zone name. This is the information needed to get into the system in order to complete the forms.

Please keep in mind, businesses have been granted an extension to May 29 to file reports.

In the event that you find fields that are problematic or questionable, please contact me and I will refer those questions directly to the Department of Revenue.

For your convenience, below is the link to the reporting website:
www.tax.illinois.gov  (please click on the EZ Reporting tab, then New Business Incentives Reporting Information link).

First let me apologize for the delay in getting the program to you for our upcoming conference in Springfield… The IEZA Board of Directors and I have been working closely with a number of groups to make sure we can present accurate information about the revised Illinois Enterprise Zone Program.

The 2012 Enterprise Zone Extension Legislation makes major changes in the way Zones are selected, managed, and reported. While the end goal of long term extension was achieved, the implementation of the program modifications will change the way administrators operate the program at the local level, the way companies report activity in each zone and the way the Department of Commerce and Economic Opportunity and the Department of Revenue gather and evaluate information.

The goal of the Fall 2012 IEZA Conference is to begin to outline the issues we will all need to address, recognizing this is a fluid and dynamic process and that some processes are still in development. So if you already have a Zone, use a Zone or want a new Zone, I hope you will join us November, in Springfield to learn more.
Thank you and hope to see you soon! 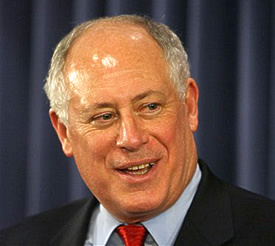 After nearly three years of discussion and negotiation, the Illinois Enterprise Zone Association (IEZA) today congratulated Governor Pat Quinn (D-Illinois) on signing Senate Bill 3616.  The bill, sponsored by Sen. Michael Frerichs (D-Champaign),Sen. Pamela Althoff (R-Crystal Lake), Rep. John Bradley (D-Marion) and Rep. David Harris (R-Mt. Prospect), passed the General Assembly unanimously and is the culmination of months of negotiation and bi-partisan cooperation.  The end result adds up to 25 years to the life of Illinois Enterprise Zones and modernizes a critical economic development tool which has gone essentially unchanged since its inception in the late 1980’s.
“The bill Governor Quinn signed today will provide stable and predictable job creation and retention incentives for the long term, more transparency and performance reporting and revised qualification criteria which may give communities not currently designated as Enterprise Zones the chance to be considered in the future,” said Craig Coil, President of the IEZA and the Economic Development Corporation of Decatur & Macon County.

Coil added, “More importantly, it also gives communities with existing zones the opportunity to renew for up to 25 years, thereby stabilizing their long term economic development strategies and giving employers of all sizes and types a measure of predictability in planning for future job development and capital project opportunities.”

Eight Enterprise Zones located in Chicago, Rockford, Decatur, Peoria, Canton/Fulton County, Des Plaines River Valley and East St. Louis were scheduled to begin expiring in 2013, but today’s action ensures they are all able to compete for jobs and economic development on a level playing field.

“As economic developers, we compete every day for jobs and investment with locations throughout the country and around the world and the Illinois Enterprise Zone program has kept us in the game for nearly 30 years”, Coil said. “By passing and signing this bill, Governor Quinn and the General Assembly have helped all of us who are involved in economic development in Illinois and the communities we represent remain competitive for the foreseeable future”.

Championed by the Illinois Manufacturers Association (IMA) with significant technical assistance and support provided by the Illinois Enterprise Zone Association (IEZA) and the Taxpayers Federation of Illinois (TFI), Senate Bill 3616 represents a true collaboration of ideas and opinions.  Illinois employers  as well as media and local government leaders, Chambers of Commerce and Economic Development Organizations throughout the state helped promote the merits of the bill as well, reaching out to their respective legislators about the importance of remaining competitive for the long term.

After nearly three years of discussion and negotiation, the Illinois  General Assembly unanimously passed Enterprise Zone extension legislation  last night.  Senate Bill 3616 will provide stable and predictable job  creation and retention incentives for the long term, more transparency and  performance reporting and revised qualification criteria which may give  communities not currently designated as Enterprise Zones the chance to be  considered for designation. It also gives communities with existing zones  the opportunity to renew for up to 25 years.  The bill awaits Governor  Quinn’s signature.

Championed by the Illinois Manufacturers Association (IMA) with  significant technical assistance and support provided by the Illinois  Enterprise Zone Association (IEZA) and the Illinois Taxpayers Federation  (IFT), 3616 was the culmination of months of work.  Employers of all sizes  as well as media and local government leaders, Chambers of Commerce and  Economic Development Organizations throughout the state helped promote the initiative as well, reaching out to their respective legislators.  *Mark Denzler of the IMA along with Tom Johnson of ITF should be commended for  their diligence and determination in getting this passed.  Mark was the  captain of the ship and did a great job of building consensus and keeping  things moving.*

Legislative
At the legislative level, Senator Mike Frerichs (D-Urbana/Champaign) and  Senator Pamela Althoff (R-Crystal Lake) were exemplary leaders on the  negotiating team in the upper chamber along with President John Cullerton,  who made this a primary issue for the Senate this session, as well as  Minority Leader Christine Radogno.  *Senators Frerichs and Althoff made  the case for zones during the statewide Enterprise Zone Special Committee  hearings and were instrumental in getting the message out about the  importance of the program to the future of Illinois economic development  efforts.*

House
In the House, Representative John Bradley (D-Marion) and Representative  David Harris (R- Mt.Prospect),  in addition to Speaker Mike Madigan, worked  well together to help that chamber reach concensus. * Representative Bradley in particular was instrumental in making sure the program met the  needs of the our employers going forward while at the same time providing  transparency and accountability to the taxpayers in these difficult financial times.*

IEZA Board
I also don’t want to forget the Board of Directors of the IEZA for their  input during this process and all of you who contacted your legislators and  community leaders to garner support for the program.  The extension could  not have happended wthout everyone coming togther for the common cause.

Chamber and Caucus Group Staffs
And finally, I have to thank the unsung heroes of the effort to pass this  bill.  The staffs of both chambers and all four caucus groups, as well as  those from the Governor’s office, DCEO and Revenue. They did an amazing  amount of work to bring all of the pieces together into the final bill,  especially given all of the other things on their plates.  Little if  anything can be accomplished at the Capital without the staffs and they  deserve significant recognition.

In the coming months, the IEZA wll be working closely with DCEO and the  Illinois Department of Revenue to design, test and communicate new zone  operating procedures and revised application processes and very soon we  will be forwarding information related to the details of the bill and key  timelines to be aware of as Zone Administrators and community leaders.

The IMA with input from IEZA initiated this legislation and worked with supporters from both sides of the aisle in the Senate. President John Cullerton and Republican Leader Christine Radogno formed a special Enterprise Zone Committee that conducted four public hearings around the state to solicit testimony and support from hundreds of companies, economic development officials, labor unions, and elected leaders.